Our primary vision at Into The Echo is to pave the way for new types of social interactions and gameplay mechanics that usher us into the next generation of MMOs. We plan to do this by giving players a sense of individuality and allowing them to find their unique purpose in the game. In other words, we don't want all players chasing after the same things. We want the motivations and aspirations of each player to be different - so that even if world events in the game are shared, each player's experience could be unique.

While many systems are needed to achieve this, the core component at the heart of this vision is our unique progression system. We heavily researched games and found that no matter how interesting the gameplay mechanics are, if a game has a linear progression system, then every player's aspiration ends up being the same - maximize XP and level up. We are doing away with this numerical and linear XP model and replacing it with what we call a hub-and-spoke style progression system.

At this point, I would like to add a caveat. Although this system results from months of research and observations made by our team, it is essential to note that we are not the first to come up with this concept. You may find similar approaches that other game designers have taken. Our innovation lies in taking the concept further and elevating its application towards achieving character individuality.

The premise behind this approach is quite simple - we break apart anything that can be levelled into individual spokes and measure the progress within each spoke using categorical tokens as opposed to a numerical scale. This ensures that we are not taking away progression in itself but simply changing the method of measurement. In fact, we are giving players the freedom to choose the paths that they prefer.

There are many nuances and details to this system, but let us touch on some higher-level concepts. First, players can be working on multiple spokes at the same time. While some spokes may have inter-dependencies, on the whole, players have complete freedom to choose which spokes they are interested in pursuing. In other words, you might choose to focus on mastering a few things, while someone else might decide to be a jack of all trades - the choice is entirely yours. The end result we expect is that each player shall no longer be defined by a single number (i.e. their level) but instead can have a unique signature that encompasses both who they are and what they aspire to become. 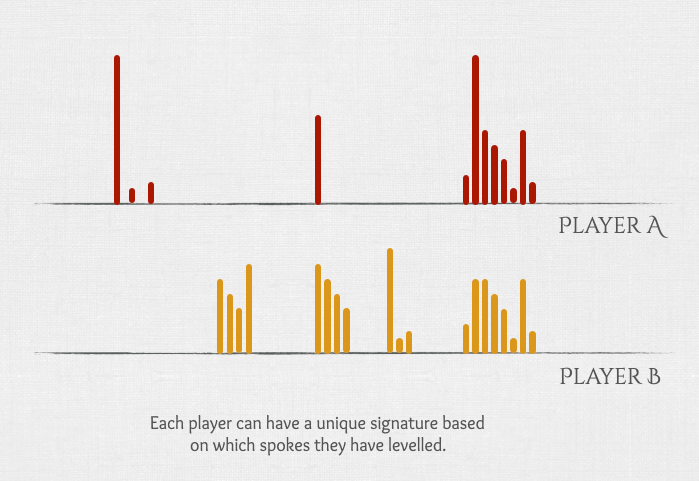 Moreover, there are some cool bonuses to using this system. Since we are not using a single linear scale, we can reduce the player level gap. Now, players who spend different amounts of time in the game can still have content to play with each other. Players can therefore focus on having fun in the game rather than trying to optimize the algorithm to maximize their XP so that they can play with their friends. 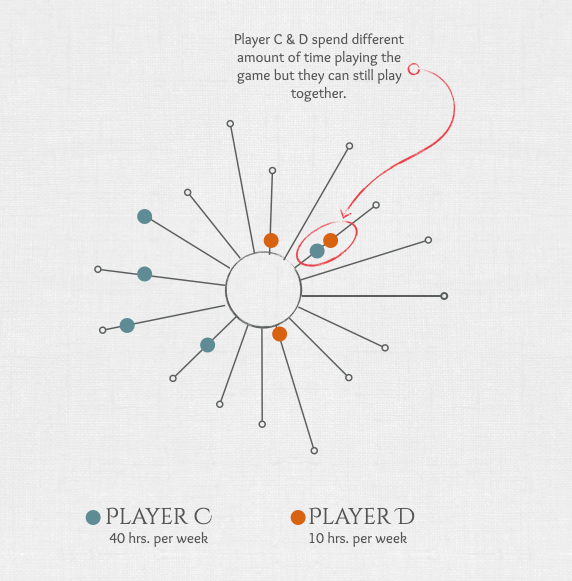 Another critical bonus is that we can reduce toxicity in the game by lowering frustration among players. Firstly, you can no longer compare players by simply comparing an arbitrary number. At the same time, content can be gated based on specific skills rather than a level number. All in all, we hope that this approach can make for wholesome gameplay at all levels of the game.

However, the ultimate bonus is that there is no limit to the number of spokes that can be added, which means we can continue to produce amazing and innovative new content without worrying about breaking previously released systems.

We have put a lot of thought into building this system, and we cannot wait to get it into your hands for your feedback. So, if you have not already done so, create an account to apply for your pre-alpha key today!.

Support us by sharing this on your social media.

Into The Echo™ All Rights Reserved. ETLOK Studios Inc.